Salam Ceria,
Do you have your own favourite football club? Me? Of course I`ve. Manchester United is mine. I`ve a book of Manchester ..new book for those who`re really fanatic fan of MU..Have a look that BOOK.. What yours? Lets read the paper la…hehe
The American wealth magazine put the Red Devils at the top of their latest list of the world’s richest football clubs, with an estimated value of £1.2 billion.
And that leaves United flying high at the top of the sporting tree, ahead of the NFL’s top team the Dallas Cowboys (£1.072 billion), and baseball’s number one club the New York Yankees (£1.040 billion).
Spanish giants Real Madrid are second on the list of top football clubs at £859m, with Arsenal third on £767m.
European and Spanish champions Barcelona are fourth on £650m, but are the only debt-free side in a top six that is rounded out by Bayern Munich and Liverpool. 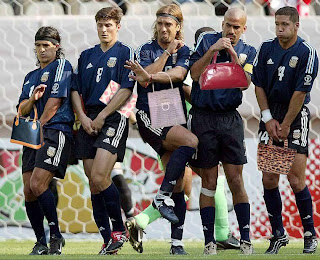 He..watch out..
Chelsea have slipped behind Juventus to ninth on the list after posting losses of nearly £50 million – the worst financial performance of any club in the top 20 – while Newcastle cling on to their place in the top 20 despite their relegation at the end of last season.
See New Ranking Most Valuable  TEAM….>>>