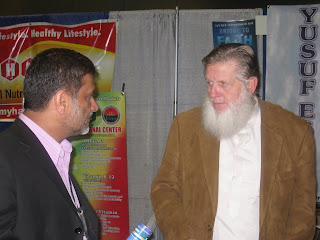 The Truth About Muslims:
All you wanted to know
but were afraid to ask
Monday,
24 Nov 2008
8pm – 10pm
MBSA Hall,
Bukit Jelutong

Yusuf Estes PhD. (born 1944), is an American convert to Islam and Chairman of “the Muslim Foundation International”, an Islamic Promotional and Missionary Organization dedicated to spreading the message of al-Islam according to the Quraan, Sunnah. He was brought up in a Protestant Christian family; members of the Disciples of Christ. Estes was known then as “Skip Estes”.

From 1962 until 1990, he had a varied career as a music minister, preacher, and the owner of Estes Piano and Organ Company. He lived in Texas and Florida In 1991, Estes had business dealings with an Egyptian Muslim called Muhammad. He learned about the religion firsthand and converted to Islam the same year along with his wife, father, and step mother. He has since pursued Arabic Language and Quraanic Studies in Egypt, Morocco and Turkey.

As of 2006, Yusuf Estes has been regularily appearing on Peace TV, which is a 24/7 Islamic channel that is broacasted to many countries around the globe.