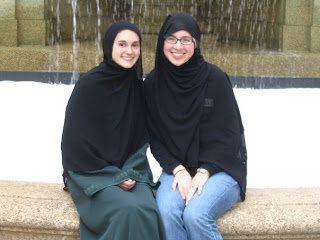 Melissa and Sarah B. sitting in front a fountain in the Quad at LSU

Today I would like to share with all pf my friends.I don`t know how I found this really nice article .But this article made my heart pounded.And I think that this article will give us lots of information and I can can share with u all.Read and learn.

Yesterday was a really awesome experience, alhamdulillah. A couple of weeks ago I challenged the women on LSU’s campus to wear hijab for a day. If you want to know how this deals with viral marketing, read on.

I wrote a column called surprise, surprise: “Columnist challenges women to wear hijab for a day.” And that day was April 25th. Writing my columns I really had no idea how many people read them. I know I get a lot of hate mail, and a lot of hate comments, and I knew at least a couple of thousand people read them every week, but this hijab challenge took it to a whole new level.

I got several emails from girls saying they wanted to participate. So I helped them out; I met with some of them and showed them how to wear the hijab. and I even ate lunch with a couple of them yesterday while they sported their hijabs. They were all some of the sweetest girls I’ve met so far at LSU.

Soon after lunch, I got a call from my friend Sarah M. who reverted to Islam about two years ago and she’s telling me that even someone at a coffee shop on campus asked her if she was wearing the hijab because of the challenge. There was a buzz already going around campus. I go the masjid later that night and some of my friends are telling me that so and so was talking about how they read my column and so on and so forth.

I was able to start dialog all over campus about the hijab. Afterward I got a various people emailing me wanting interviews, I gave a talk about women in Islam to a Women and Gender Studies class; It’s definitely the type of dawah opportunity no one could turn down. That was a lot of potential ajar to pass up.

People would ask the girls why they are wearing it, and they would tell them and explain to them why Muslim Women wear the hijab and how we are not oppressed. It was a mass dawah effort. A lot like viral marketing/PR. It’s no wonder why people are all about getting more Muslims in the media. The potential is HUGE for dawah. Imagine, A hijab day on campus could turn into a nation-wide awareness day, which is very possible once we get more Muslims to be trained in media and marketing work.

That’s why I’m starting my own PR company soon. Business proposal should be done tonight and my company should be legally registered soon. There is so much potential out there and so many ideas on how to tap into this field. I’ve seen It work and have felt the sweetness of Allah ‘az wa jal making my efforts successful. Wallahi it’s only by the Will of Allah. And I realize as well, that this is all a test from Allah. 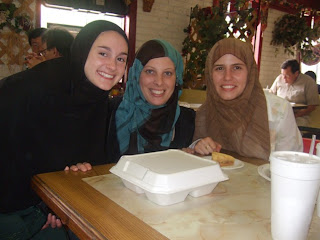 Melissa, Michelle, and Maggie posing for a picture at Atcha Bakery (mmm’ Atcha.)

The Fruits And Veggies of your Efforts:

Melissa was perhaps the sweetest of them all. She was very enthusiastic and excited to take on the hijab challenge, and told everyone she knew about it. We ate lunch and at night she came to our masjid. I stole about 10 girls (unintentionally) away from the youth halaqa to join in our discussion about the hijab. Subhanallah, although I’ve taught these girls before *shout out to you girls :P* and I see them all the time at the masjid, I learned so much about them just from that discussion.

Alhamdulillah, Allah ‘az wa jal gave me such a blessing to be able to change people’s lives. They jokingly (but truthfully) told Melissa how I used to chase after them like herds of sheep and how I wouldn’t start the halaqah until I swung my lasso and reeled them all into the room (that’s southern talk, y’all). They said how at first they ran away from lectures. Then When I would gather them they would come for half the time then leave, then they said that the more they listened to the words of the lectures, the more they wanted to stay on their own, until it lead them to change.

Don’t give up on what you are doing even if you don’t see immediate results. Never give back or refuse to accept a gift Allah is offering you (i.e. opportunities for dawah). It could be that if we turn down these opporunities and freebies that Allah gives us, that He ‘az wa jal will in turn never give you that opportunity again and give it to someone more greatful.

It is an amazing feeling seeing the fruits of your actions and the potential that is to come, but only if you remember that it was all done by the Will of Allah. and Allah is truly the one that guides the hearts.

Stay tuned for my follow up column in The Daily Reveille next Friday about the results of the Hijab Challenge, inshaAllah. It will inshaAllah be the last column I write for the paper. It’s been a good 1.5 years, alhamdulillah and an awesome way to end that chapter of my life. Wallahu ta’ala alem. So, what are YOU going to do to spread the deen of Allah? (And, do you need a PR person? :P)