These days, it’s the party that takes centre stage. PAS is the most organised, financially independent and talented organisation in the country.

DOES Sabah really hold the key to the future of the country? And will the Pakatan Rakyat actually take over the government come August or September? Excuse the pun, but the jumping frog is actually a red herring.

The true kingmaker in this current political scenario is actually PAS, not Sabah or Sarawak.

Last month, the Malay writers and intellectual group called Gapena held a meeting in Johor to discuss the future of the Malays in the light of the recent elections results.

And central to Gapena’s memo was the call to the rulers as well as Malay political leaders to fulfil their duties and responsibilities to preserve and protect Kedaulatan Melayu in order that this remains the core ideology in Malaysian politics.

Some may argue the extent of Gapena’s influence over a diverse Malay population but what is important to note is that Malay-based interest groups have been all out to woo the hearts and minds of the Malay constituents.

This includes Umno, PKR, PAS, the royal houses, the civil service and, as mentioned the Malay NGOs. The contest for the Malay space is heating up and is about to get hotter.

Could this be Tun Dr Mathathir Mohamad’s prime concern when he resigned from Umno on May 18?

There is no question of a succession plan as promised by Datuk Seri Abdullah Ahmad Badawi but when the succession is carried out will have a great bearing on what is to become of Malaysian politics.

PAS contested in 66 parliamentary seats in 2008.

This is 18 seats fewer than it did in the 2004 election because PAS made a pact with both PKR and DAP that they would all only hold straight fights with the BN this time.

If PAS had known the political tsunami was coming, would PAS have relinquished that many seats for its partners?

Despite the sacrifices, PAS won 23 seats this time compared with seven in 2004. Its popular votes also increased but only from about 1.1 million to 1.14 million.

PAS may have gained 16 more winning seats plus two more Mentris Besar but in terms of popular votes and the number of seats they could have won, PAS benefited the least of all the three Opposition parties.

Yet PAS is the most well organised, most financially independent and most talented party in Malaysia right now.

Not only did it give up some of its contestable seats, it shelved its Islamic agenda in the back burner for the sake of a cohesive strategy for the Opposition front.

What will happen in the next elections? Will PAS request for the return of the seats or will joining BN provide it with more security?

The fate of the country actually lies with PAS rather than with PKR or the East Malaysians. 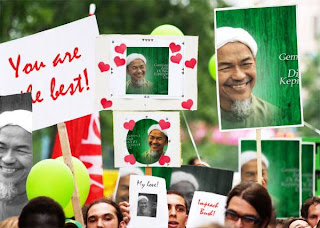 It is said that it is unlikely that at this point in time PAS would regroup to become one big Umno while Datuk Nik Aziz Nik Mat, its spiritual and paramount leader is still around.

However, they would consider re-uniting with the BN. It will, after all, serve several ambitions and is probably the safest route to its long-term survival.

One, to be part of the ruling coalition would bring an end to the strenuous federal-state relations in at least three states.

Two, it would serve the wish of the Malay ground wanting to see more unity at least along the lines of Islam if not, Malay.

The Malay middle-class may have shown tendencies towards a more open multiracial concept and approach.

Islamic unity, on the other hand, is definitely more universal among all the classes.

Three, PAS gets to discipline Umno for its wayward ways in the name of Islam, Malay unity and future of Malaysia.

Four, the move to rejoin BN would secure its position for the next few general elections, ending the Opposition’s cat-and-mouse tactics.

The above fourth reason is the most seductive for Umno as it would bring an end to the current delicate impasse – whoever the president of Umno is or, might be in the future.

The next question would be – how would the component parties like the MCA then contend with the new BN? This will depend how well they wedge their future strategies between the two giants.

In the aftermath of the recent elections, it seems the new political game has barely even begun for Malaysia.

Fui K. Soong is the CEO of Institute of Strategic Analysis and Policy Research (INSAP), a think tank of MCA, an organisation dedicated to research on the removal of barriers and bias in policies that impede Malaysian unity, racial harmony and economic prosperity.