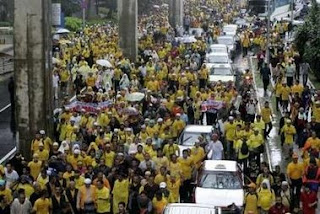 It seems so long since the last issue about istikharah.Now i`ve free time to write something new.One girl ask me about demonstration which i promote in my blog.Petrol hike protest in malaysia which will be held in 12 of july 2008.

To me,demostration is the last choice.But it depend on the issues.If there are about sensitive issues of islam..there is no tolerant should be given.For this hike petrol price..give the government some period time to review back.Then send to them memorandum against the petrol hike price.The way to act before we proceed to the biggest one.Then after no responses from the upper stage..lets do the havoc n gigantic protest.This event will assure that the government will wake up from their naughty-stupid dreams.

Lets review ,the petrol hike price to 78 cent per liter is quite rushing action and really burden to the layman whose carrying daughters and sons with the salary per month only below than rm1000.The government should think about this people. 40% increase will definitely bring hardship to the people as the price of goods will go up.

By now it is becoming too obvious that the United States is playing the oil game all over again. And this is the desperate gamble of a country whose economy is neck deep in trouble.Given this scenario, managing prices of oil is central to the US economic architecture. Expectedly, this gamble has been played in a great alliance between the US government, US financial sector and the media.